A relaunch of the Americas Chapter of ‎the IARLJ!

Over the past years many people have worked valiantly to keep the chapter afloat, including Michael Ross, Rick Jackson, Paulah Dauns, Lois Figg, Juan Osuna, Jean Guy Fleury, and Gaetan Cousineau. A great debt of gratitude is owed to these folks for their commitment and passion to the important work of an Americas Chapter.  The collective wisdom of this dedicated group was that in order to succeed, the chapter would need renewed commitment from key players in Canada, the United States and countries in Latin and Central America.  We have been lucky to also have the support and wisdom of Furio De Angelis, UNHCR representative in Canada.

After four years of intense Refugee reform, the Immigration and Refugee Board is now in a position to provide administrative and secretarial support to help revitalize this endeavour.  This in turn was pivotal in convincing Justice Zinn of the Federal Court (Canada) to graciously take on the interim President's role. 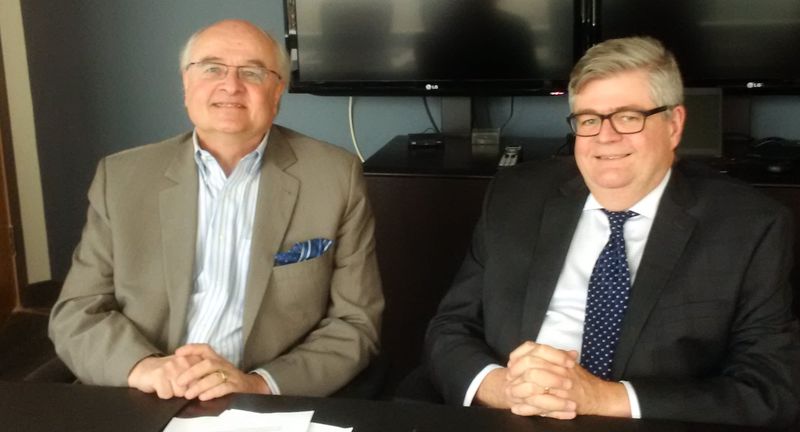 Mr. Justice Zinn of the Federal Court (Canada) meeting with Mr. Mario Dion, Chairperson, Immigration and Refugee Board of Canada to discuss cooperation on the revitalization of the Americas Chapter of the IARLJ.

At the same time, intense cajoling was underway to entice the United States to bring forward a candidate for the Americas Chapter Executive committee.  A huge thank you to Lori Scialabba, Deputy Director, US Citizenship an Immigration Services, whose support has been instrumental in moving forward.

The last piece of the puzzle was to find a candidate for the Executive committee from Mexico and south. We remain optimistic that this will become a reality in the near future, with the possibility of participation on the Executive from either the Costa Rican Immigration Administrative Tribunal or the Inter-American Court of Human Rights in Costa Rica.  Stay tuned on this front….

The timing is also good, as there are a number of important initiatives that the Chapter can ‎both profit from, but at the same time, support.

The Comisión Mexicana de Ayuda a Refugiados (COMAR),  Citizenship and Immigration Canada (CIC) and the Immigration and Refugee Board (IRB) Canada, the United States Citizenship and Immigration Services (USCIS) Asylum Division and the United Nations High Commissioner for Refugees (UNHCR) are collaborating on a number of capacity building and sharing of best practices initiatives. For example, work is being done on strengthening technical cooperation on the provision and sharing of Country of Origin Information (COI) to asylum adjudicators.  The three countries have also agreed to continue to work on facilitating the sharing of best practices through joint training initiatives, meetings and international conferences.

A number of workshops have also taken place.  On November 27, 2015, The IRB sent representatives to meet with officials from the Mexican Commission for Refugee Assistance (COMAR), the Mexican Secretariat for Foreign Affairs and the Office of the United Nations High Commissioner for Refugees (UNHCR) in Mexico.  The primary purpose was for the delivery of a training workshop on country of origin (COI) research practices by the IRB’s Research Directorate (RD) in Mexico City.  At the same time, the IRB was able to conduct research in-country over a two-week period immediately following the training workshop. This research involved meetings with and interviewing experts and officials from relevant governmental, non-governmental, academic and research-focussed organizations.

The research will address information gaps related to the most significant claim types currently being encountered by the RPD not only for Mexico, but also Honduras and El Salvador, given the presence of Central America specialists in Mexico City. Most recently, claims from these three countries have centered on recourse for citizens concerned with criminality or corruption as well as the activities of criminal gangs. Information gained during the course of the interviews will be disseminated in several future responses to information requests as the IRB’s Research Directorate updates national documentation packages and responds to specific requests from members.

An exciting joint fact-finding mission to El Salvador also took place in mid-April, 2016, where   COMAR, MFA, UNHCR Mexico/Canada  and USCIS all sent representatives to conduct research on a number of important topics such as the state’s efforts to combat crime, the structure of criminal gangs, their areas of operation, activities and recruitment practices, the situation of violence against women and domestic violence, and the efficacy of the judiciary.

There are also a number of additional initiatives being pursued by the UNHCR.  Since 2012, Latin American states progressively adopted the Quality Assurance Initiative (QAI), a self-auditing methodology that aims at strengthening and improving the fairness, promptness and efficiency of national refugee status determination systems. The QAI program relates to a philosophy and set of guiding principles based on a comparative analysis of national systems with international and regional standards. The government-led initiative, with the technical support of UNHCR, evaluates the asylum system, structures and resources currently in place in order to constantly improve services and efficiencies pf RSD procedures and outcomes.

At present Argentina, Brazil, Chile, Costa Rica, Mexico and Panama have started the QAI program. Bolivia and Peru and the Caribbean state of Trinidad and Tobago will also join the initiative soon.

The QAI program is divided in phases analysing different aspects of the asylum procedure: Phase 0, evaluates the human resource and structure in place to conduct RSD; Phase 1, is about registration/reception; Phase 2, audits case management procedures and eligibility interviews; Phase 3, looks at first instance decision-making; and Phase 4 at second instance appeal procedures. Each audit phase concludes with recommendations based on principle of due process, respect for the rule of law and fair and efficient RSD procedures. Once all phases are completed and recommendations implemented, the asylum system will enter a periodical permanent QAI modality, so that the system will continuously aim at improving itself to the benefit of those individuals in need of international protection.

The QAI is a critical element of the ‘Quality Asylum Program’, one of the 11 programs that Latin America and the Caribbean agreed upon in 2014 under the Brazil Declaration and Plan of Action (BPA). The BPA sets a ten year roadmap to strengthen protection and solutions in the region and it is expected that many states in the region will embrace QAI as a successful capacity building methodology to improve access to fair and efficient RSD procedures in the continent.

The excitement building has enabled us to work closely with Professor James Simeon of York University to arrange for an Americas chapter meeting during the Canadian Association for  Refugees and Forced Migration Studies (CARFMS) Conference in Winnipeg, Canada in May. We hope to see many of you there!  For information on the CARFMS conference please visit their website:  http://carfms.org/carfms-2016-conference/

In addition to rebuilding the chapter ‎, the revitalized group has set their sights high-- an international conference for 2017 to be held hopefully in Washington, DC.

It is an exciting time to get involved!   If you are interested in becoming a member of the Americas chapter please contact us at

Ross Pattee
Executive Director
Immigration and Refugee Board of Canada

Circular message to all members of the IARMJ with contacts, colleagues or friends in Ukraine.: invitation to assist judges and their family members from Ukraine (in administrative matters concerning access to Europe)

Virtual conference: Access to Justice and Migrants and Refugees Rights

The Role of African Courts in Promoting Refugee Rights

The Secretariat
International Association of Refugee and Migration Judges